It's Christmas which means new Ruby time! But I think it's all too easy to forget the new features of recent versions so we can utilize the latest Ruby goodness! Here's a great writeup published this week in 2017 on those features in Ruby 2.5

A pagination helper for Rails in 2004 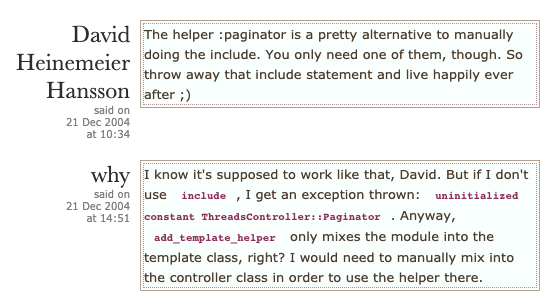 Well would you look at that! A little cheeky banter between Ruby legends _why and DHH this week fifteen years ago. This is a neat little peek into Rails pagination in 2004, a year before 1.0 was released! (Yes, it's that old of a problem space)

What are events, why you might care, and how EventMachine can help

Who remembers reading the Tucows blog back in the day? It was a massive source of info for Rubyists in the early coding days. Here's a glimpse into the Ruby Advent Calendar they were hosting in 2005 (note: the famous PeterC also had a few that may yet get featured this month!)

Gosh, I haven't hustled through the RubyTalk archives yet... That changes this week! Here's a pleasant fifteen year old (this week) thread on interesting Ruby snippets that accomplish cool things. (We're talking servers in six lines)